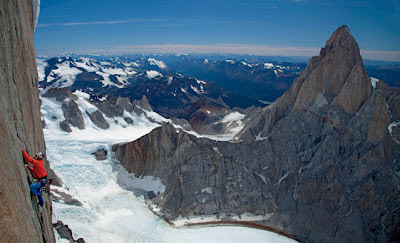 “The siege tactic used on Cerro Torre’s Compressor Route [in 1970] is perhaps the most egregious example of alpinism’s egoistic ‘manifest destiny’ philosophy, one that calls for conquering the mountain by any means, then leaving in place the pitons, bolts, ropes and cables. This debases a route, leaving it accessible to those without the skill or nerve to climb in good style. It is the alpinist’s equivalent of hunting with headlights.”
- Patagonia founder Yvon Chouinard, February 15, 2012

(3200 words, Grayson Schaffer, Outside)
Email ThisBlogThis!Share to TwitterShare to FacebookShare to Pinterest